The city with plenty to shout about

Visit Valencia and you'll soon discover why the locals love to brag about its world-class galleries, food and beaches

- Paella was invented in Valencia, and its main ingredient is the star attraction at the Rice Museum
- Don't miss Mercat de Colon, the city centre market that is a showcase for Valencian gastronomy
- You want art? There are more than 1,000 works by Picasso at the Fundacio Bancaja

It's worth getting up early if you’re staying at the Balneario Las Arenas on the shoreline in Valencia’s Cabanyal district.

Stand under the hotel’s giant weeping fig tree just before dawn and you’ll be there as the sun comes up over the Mediterranean and hundreds of roosting birds wake up and chatter in the warming air.

In fact, it seems that everyone wants to talk in Valencia. Up the coast, Barcelona questions its future and Catalans rage against mass tourism, but Valencians, who speak their own version of Catalan, think the world should know about their remarkable city. 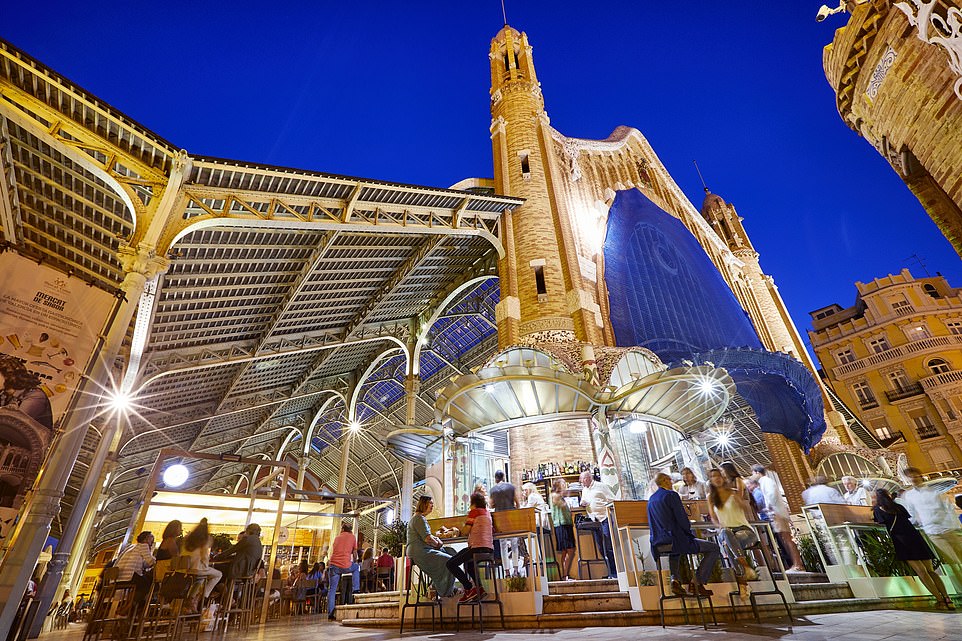 Loud and proud: The Art Nouveau Mercat de Colon in the city centre is a showcase for Valencian gastronomy

Often that means food, and they’ll point you to the twin Art Nouveau wonders of Mercat de Colon, the city centre market that is a showcase for Valencian gastronomy, and the teeming Mercat Central, where the stalls are piled with an astonishing array of produce and fantastically fresh fish.

Paella was invented in Valencia, and its main ingredient is the star attraction at the Rice Museum – just one of the many museums in a city that also celebrates lead soldiers, and, at the beautiful baroque palace of the Marquis de dos Aguas, silk and ceramics.

You want art? There are more than 1,000 works by Picasso at the Fundacio Bancaja, and there’s the world-class Valencia Institute of Modern Art as well as the Museum of Fine Arts, stuffed with Renaissance wonders and a room devoted to the city’s greatest artist, Joaquin Sorolla.

He created luminescent paintings of turn-of-the-19th-Century beach life in Cabanyal, a former fishing village on one of the best city beaches in Europe – more than a match for Marseilles or Barcelona – and behind the beach, much of the district is as Sorolla left it. 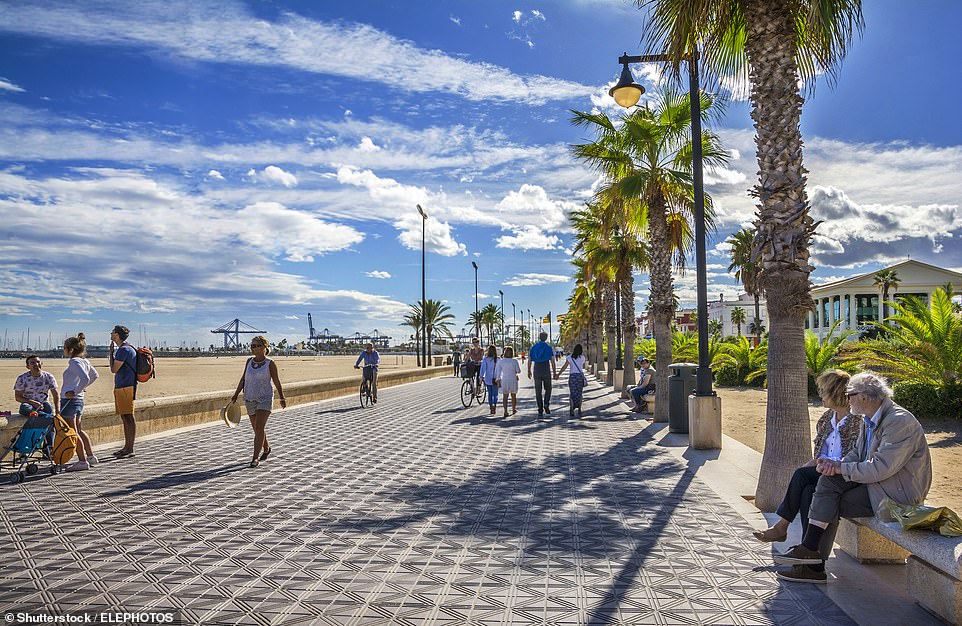 With its fine golden sand, La Malvarrosa is one of Valencia's most popular beaches

In the perfectly named Plaza de los Hombres del Mar (Men of the Sea Square), the sundial painted on the wall of the stables – which housed the oxen that once pulled fishing boats from the sea – dates from 1895. Time has also been paused in the bar at Casa Montana on Carrer de Josep Benlliure. Local brandy, vermouth and the Valencian anis called cazalla have been served here since 1836. Drinks come with free tapas, but upgrade to raciones (full-size meals) and you will be ushered into the restaurant at the back. Book ahead.

Simple is best here, such as tomatoes, olive oil, crusty bread, stewed beans or the day’s sea catch, washed down with a white wine made from the Valencian Merseguera grape.

After, head north past the brightly coloured tiled facades of holiday homes built by rich Valencians in the early 20th Century. Each house is its own ceramic masterpiece.

At the end of the street, Cabanyal gives way to the Malvarrosa – the street facing the beach. By April it will be shimmering in an average of eight hours of sunshine a day. So if you need some shade, step into the eccentric museum devoted to the 20th Century writer Vicente Blasco Ibanez. He was the author of dozens of books and seemed to collect more than his fair share of enemies. He was once shot at by one of them, but was saved when the bullet lodged in his belt buckle. He ended up in Hollywood in the 1920s, where he launched the careers of Rudolph Valentino and Greta Garbo.

If that detour makes you hungry again, one of Valencia’s great food institutions is next door. Casa Carmela serves the best paella in town, cooked on open wood fires. You can have the seafood or rabbit and snail versions but, either way, start with sardines straight from the sea, dipped in flour and fried. 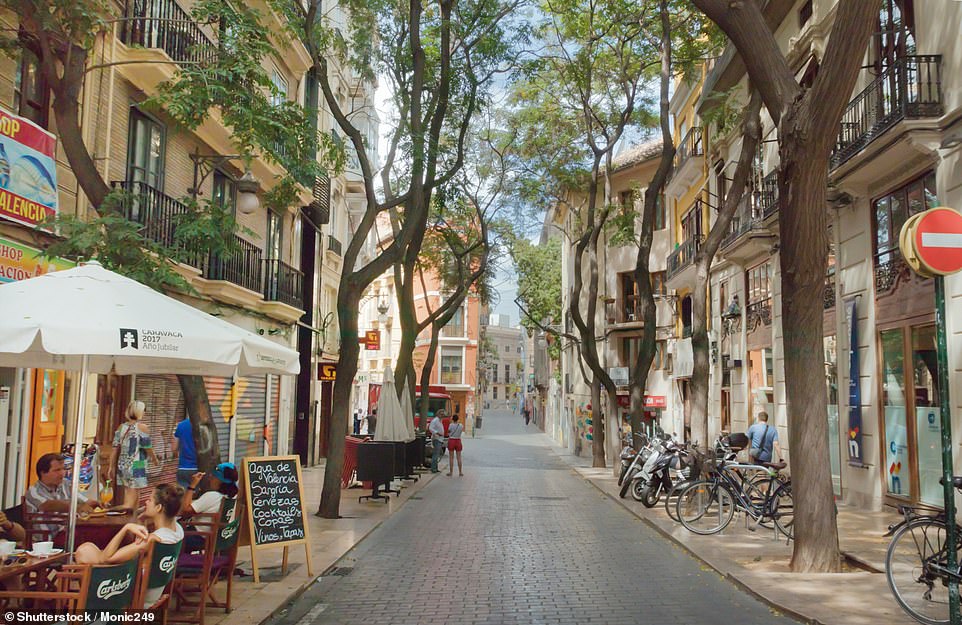 If Valencia is playing havoc with your waistline, fight back by walking through the Jardin del Turia, a huge park in an old river bed that links the sea to the city centre.

It is also home to the futuristic City of Arts and Sciences, which features a science museum and opera house designed by Valencia’s star architect, Santiago Calatrava.

Valencia’s cathedral was begun in the 13th Century and contains the only Holy Grail – a cup said to have been used by Jesus at the Last Supper – to be revered by the Vatican.

Around a corner, the Horchateria Santa Catalina serves Valencia’s traditional drink, horchata, a milk made from crushed tiger nuts. The unsweetened version is popular, but possibly pointless as locals accompany it with sugared rolls called farton – which taste better than they sound.

Afterwards, slip into the narrow streets of the medieval Barrio Carmen, where you’ll find bakeries selling pastel de boniato, the Valencian sweet potato and cinnamon pasty livened with a dash of cazalla.

On Calle Cajeros, stop at Simple, a boutique specialising in Valencian crafts – this is where you’ll get your summer espadrilles.

Now allow yourself to get slightly lost until you emerge by the Central Market, where a model of a parrot signifies the sing-song of Valencians talking about food. And once more, you’re underneath the birds.